Jad’ an-Nar (or HAUKI), is a ritual cult practiced by members of the Berta tribe in the south of the Blue Nile, and is associated with the seasons of cultivation and harvest.

When the crops reach maturity early in October, preparations start for a seasonal musical rite titled Hauki, which lasts for a whole month. Everybody is required to attend the event even those outside the area. A sheikh is responsible for Hauki. Announcing for the cult beginning is made by pouring large amounts of water under a tree close to the house of Sheikh al ‘āda (the ritual leader). From that moment members of the Berta community abstain performing certain deeds for fear of mortal catastrophic consequences, such as stop lighting fire outside their houses, avoiding eating from the new crop unless there is a famine. They also avoid dressing in clothes that resemble those of Sheikh al ‘āda, otherwise they will subject themselves to a trial and a possible fine. From first to seventh of the month, children are beaten with whips. At week end, butchered animals and Bāṣa (liquer) are made ready. During the ritual, Sheikh al ‘āda and his seven cohorts stay in a special house for a month. Then, a special pattern of singing called Abubum is performed accompanied by group dancing. Men and women form a solid ring with every man holding the woman before him from the waist. Some people stand guard during the dance watching those who disturb order. As no melody or rhythm musical instruments accompany this type of singing, disrupting the tempo kept by the dancers while singing and beating the ground with their feet, is bound to cause confusion among many of them. The individual responsible is lashed with whips to restore his steadiness and dance in harmony with the rest of the group. Sheikh al ‘āda position is hereditary. If he dies, his eldest son or daughter will succeed him, and then an inauguration ceremony is held. He wears in red & green, sits on a wooden seat, carrying a stick and spear, with seven followers or guards standing around him. The people spend their seventh night in front of the sheikh’s house dancing and singing until dawn breaks. At dawn, they kindle the ‘āda (custom) fire from which the Sheikh and his followers take a lit stick each. The Sheikh then tosses his burning stick, after counting to 7, towards the east followed by the others. Then singing pattern called Ahishāli (war songs) is performed accompanied by dance; men carry their spears and sticks and run around fighting a phantom enemy. Finally they turn back to women who meet them with singing and ululations of joy. The village sheikh, Sheikh al ‘ada and Sheikh al Mazāmīr (the pipes sheikh), signify three levels of social awareness: political, spiritual and aesthetic, which work harmonically to yield the resultant of the spiritual culture of the Berta society. During the period of Hauki rituals the village sheikh loses His political power completely, since all powers in this period devolve to the Sheikh al ‘āda. The village sheikh then becomes an ordinary member subject to the punishment approved by the religious authority. 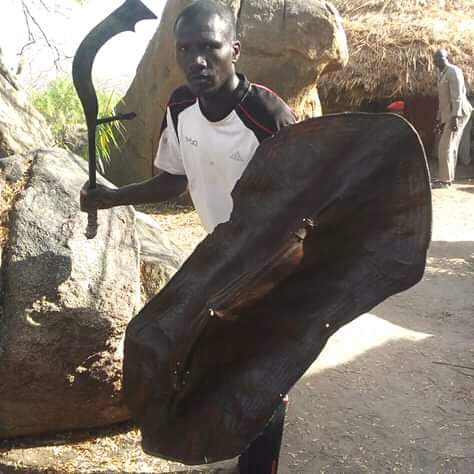